Paul Smith is a fashion label named after the man him self, Paul Smith,  if one story of success should inspire you then it must be his, at 16 year’s old Paul wanted to become a professional racing cyclist, until he crashed into the back of a car and was hospitalised for three months, he ended up working in a clothing warehouse in Beeston, Nottingham, he met an art student called Pauline who became his wife, she inspired him to design & make his own cloths, so with a dream and £600 savings,he opened up his first boutique Paul Smith Vetement Pour Homme, in Byard Lane in Nottingham,he became the first shop outside London to sell the likes of Kenzo and Katharine Hamnett, he attend night tailoring classes to learn his trade, after a couple of years Paul finally got the look he wanted, so in 1976 he showed his Menswear collection named after him self Paul Smith in Paris, his collection was a success.

Paul Smith signature stripe is used on many of their accessories

Paul Smith`s stores are personally over seen by Paul himself, every store it totally different, from a shocking pink building with movie set styling on Melrose Avenue, LA, they capture the unmistakable Englishness of Paul Smith design`s, each store has a collection of jewelry & books also antiques, its been stated that if a customer uses a chair to change & they like the chair they can buy it.

Paul Smith is global – the collection is wholesaled to 66 countries and has 17 shops in England. Paul Smith shops are found in London, Paris, Milan, New York, San Francisco, Los Angeles, Antwerp, Hong Kong, Singapore, Taiwan, Korea, U.A.E. – and over 200 throughout Japan. Paul remains fully involved in the Japanese business designing the clothes, choosing the fabrics, approving the shop locations and overseeing every development within the company. Paul Smith also has impressive and diverse showrooms in London, Paris, Milan, New York, and Tokyo. 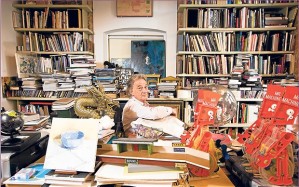 Paul Smith arrives at his office every morning at 6 AM

Paul Smith still leads the company from the front as designer & chairman, he is involved in every aspect of the day-to-day running of the business, which is very rare in business of his size.

Paul Smith is not just clothing brand its a mans dream that came true, the inspiration the style is still as fresh as it was 40 years ago here to the next 40 years.

BE BOLD BE PROUD

This site uses Akismet to reduce spam. Learn how your comment data is processed.